skip to main | skip to sidebar

Would You Prefer…
To spend the rest of your life wearing only 1970s leisure suits
Or
1980s aerobics clothing?

Please discuss amongst yourselves.
Posted by Ryan Murphy at 8:01 AM

Hi Gang,
Welcome back for another edition of Ask Ryan, the column where sports and entertainment co-mingle like a pair of sweaty teens at a make-out party. This week's mailbag is overflowing with queries about eye-gouging, Craig Biggio's painful claim to fame and ways to improve the Tour de France. Read all about it at: http://msn.foxsports.com/other/story/7059850
Posted by Ryan Murphy at 7:42 AM

Sit back and relax as you enjoy this week’s sports shorts.

Tony Gwynn is the latest athlete to have his image placed on a Wheaties box. It’s believed to be the first time that the cereal’s spokesmodel will have a higher fat content than the cereal itself.

Detroit Pistons forward Rasheed Wallace was spotted at Saturday's fight between Winky Wright and Bernard Hopkins. It’s believed to be the first time he’s witnessed a fight without joining into the fray.

Seattle Supersonics forward Kevin Durant has inked a lucrative endorsement deal with Upper Deck. It’s a natural fit since the company’s trading cards are nearly as one-dimensional as he is.

Stephon Marbury has expressed interest in playing in Italy. What a great idea. I’ve never been convinced that English was his first language anyhow.

The FBI is investigating Tim Donaghy, an NBA referee who allegedly bet on basketball games. The scandal goes a long way in explaining how the Knicks managed to win more than 10 games.

Former world champion pole vaulter Giuseppe Gibilisco has been banned for two years for his alleged role in a doping case. Something tells us he’ll eventually rise above his detractors.

Dallas Mavericks owner Mark Cuban defended the NBA’s integrity on one of his recent blogs. The incident is believed to represent the first time that the words Mark Cuban and integrity have been uttered in the same sentence.

NHL commissioner Gary Bettman is expected to recommend to the Board of Governors that the league expand by two teams. That’s wonderful news for the residents of Chicago who have been waiting for a professional team for more than a decade.
Posted by Ryan Murphy at 9:45 AM

This week’s burning question has been inspired by Chinese forward Yi Jianlian’s reluctance to sign a contract with the Bucks.

Would You Prefer…
To spend three weeks in prison
Or
Three years in Milwaukee?

Please discuss amongst yourselves.
Posted by Ryan Murphy at 8:30 AM

Ask Ryan - News You Can Use

Hi Gang,
Welcome back for another edition of Ask Ryan, the column where sports and entertainment collide converge like David Wells at an all-you-can-eat buffet. This week's mailbag is bursting at the seams with queries about famous roomies, the most common name in the Major Leagues and the odds of being injured by a toilet seat. Read all about it at: http://msn.foxsports.com/other/story/7038908
Posted by Ryan Murphy at 10:24 AM 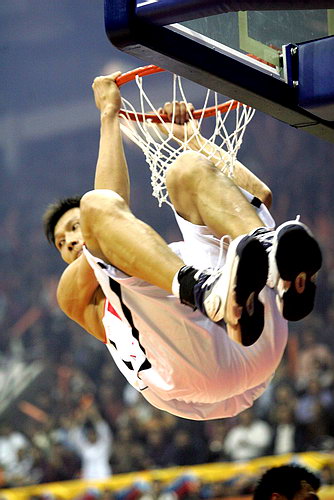 Kick back as you enjoy this week's sports shorts.
68 percent of voters polled by China Daily want Yi Jianlian to sign with the Bucks. The poll proves two things: 1) Chinese citizens believe strongly in Jianlian’s ability to flourish in the NBA and 2) They’ve obviously never been to Milwaukee.

Antoine Walker and a relative were bound at gunpoint while multiple robbers took a car, cash and jewelry from his Chicago home. It was a particularly terrifying incident because, unlike Walker, the robbers could actually shoot straight.

Longtime major league umpire Shag Crawford has died at the age of 90. On the positive side, there should be no shortage of major league managers willing to kick dirt on his coffin.

The Carolina Panthers have signed Philippe Gardent, a former member of the French national bobsled team. The signing is expected to come in handy should the Panthers win the Super Bowl and Hell freezes over.

David Wells has been suspended for seven games for his animated argument with an umpire. It could have been worse. He could have eaten him.

Wrigley has signed a deal with the National Basketball Association making it the Official Chewing Gum of the NBA. The partnership is ironic given the fact that half the players in the league can’t walk and chew gum at the same time.

The New York Mets have designated 48-year-old infielder Julio Franco for assignment. It’s still unclear whether his assignment will be in the Minor Leagues or in a nursing home.

The Philadelphia Phillies have become the first club in Major League history to lose 10,000 games. Incidentally, that’s also how many games Tom Glavine may need to pitch before collecting his 300th win.

French long jumper Salim Sdiri was accidentally hit with a javelin at an athletics meet in Rome. It’s believed to be the first time in history that a track and field event has included a hole in one.

Astros manager Phil Garner has said he’s willing to use voodoo to get into the head of Cubs' righthander Carlos Zambrano. Why bother? All Michael Barrett needed was his right fist.
Posted by Ryan Murphy at 10:18 AM

Okay, Gang, it’s time for this week’s burning question. Following a 17-7 loss to the Rockies, Mets backstop Paul LoDuca was quoted as saying, “We could have had Jesus on the mound and they still would have gotten hits.” LoDuca's statement may have been blasphemous, but it got me thinking: who would you personally want on the mound with a one run lead in the ninth?

Please discuss amongst yourselves.
Posted by Ryan Murphy at 11:31 AM

Hi Gang,
Welcome back for another edition of Ask Ryan, the column where sports and entertainment playfully mingle like A-Rod and a busty blonde. This week's mailbag is bursting at the seams with queries about the biggest feet in the NBA, guys named Jesus and our fascination with smarmy British villains. Read all about it at: http://msn.foxsports.com/other/story/7015780

Take a load off your feet as you enjoy this week's sports shorts.
Former NHL All-Star Jeremy Roenick announced his retirement recently through a text message. The news came as shock to many observers who didn’t realize Roenick could actually write.

The health of New York owner George Steinbrenner is believed to be declining rapidly. Then again, you’d probably feel ill too if you had to watch the Yankees every day.

Amare Stoudemire's half brother has been identified in connection with the shooting death of a 27-year-old man in Scottsdale. It’s nice to see that high percentage shooting runs in the family.

Washington Nationals Pitcher Jesus Colome has been admitted to hospital with an infection to his right buttocks. I guess that’s what happens when you have your butt kicked all season.

Kobe Bryant apologized to Lakers GM Mitch Kupchak in person after making disparaging comments about the team. It was believed to be an excellent face-to-two-faced meeting.

Grant Hill has signed a two year contract with the Suns. The contract will cost Phoenix $3.8 million in salary and $10 million in physiotherapy expenses.

Olympic leaders have voted to create a Youth Olympics for athletes aged 14-18. The program was approved unanimously by pedophiles around the world.

Major League baseball has confirmed that at least one armed FBI agent will attend each one of Barry Bonds’ games until he breaks Hank Aaron’s homerun record. It’s believed to be the best protection Bonds has had in the order since the Giants got rid of Jeff Kent.

NASCAR Craftsman Truck Series driver Aaron Fike was arrested on charges of possession of heroin. It’s nice to see that NASCAR is finally trying to reach out to an urban audience.
Posted by Ryan Murphy at 9:32 AM

Okay Gang, it's time for this week's burning question.

Would You Prefer…
To fight one round with Mike Tyson
Or
Run through a dog pound covered in veal cutlets?

Please discuss amongst yourselves.
Posted by Ryan Murphy at 10:56 AM Former Red Sox pitcher Bill Lee once observed that “You should enter a ballpark the way you enter a church.” Indeed, both sites contain their fair share of sacred ground, but which ballparks are most worthy of your devotion? I've attempted to answer that age-old question by compiling my list of the 10 mightiest cathedrals in baseball. My selections are based on overall aesthetic appeal, architectural integrity, unique features, and in the case of Miller Park, the presence of giant sausage races. Read all about it at: http://ca.askmen.com/sports/fitness_top_ten_100/106_fitness_list.html
Posted by Ryan Murphy at 9:14 AM

A Trip Down Memory Lane

Do you need more than one Ask Ryan column to get you through the week? Dip into my Fox Sports archive at: http://msn.foxsports.com/search?sp-q=ask+ryan
Happy reading and keep your balls on the court!
Posted by Ryan Murphy at 8:55 AM

Ask Ryan - Fresh out of the Oven

Hi Gang,
Its time for another edition of Ask Ryan, the sports column where the day's top stories are poked, skewered and cooked at 350 for 20-to-25 minutes. This week's mailbag is bursting at the seams with queries about the whereabouts of Ron Cey, the legitimacy of Barry Bonds' home run chase and ways to improve the WNBA. Read all about it at: http://msn.foxsports.com/other/story/6993360
Posted by Ryan Murphy at 8:51 AM

In addition to writing Ask Ryan I'm also a regular contributor to The National Lampoon Sports Minute (Or So), a weekly short that mocks everything sport. Created by Steve Hofstetter and written by a staff of comedians, the Minute is syndicated weekly by 162 radio stations, 29 newspapers, and 15 websites. Here's the first of my many weekly musings:

Roger Federer won his 50th straight match on grass. Sadly, he missed out on the award ceremony afterwards due to an overwhelming case of the munchies.

A couple in England have given their newborn daughter 25 middle names, each the last name of a former boxing champion. It’s believed to be the first time that the birth certificate will weigh more than the baby itself.

A group of New York Yankees went to visit injured Iraq war veterans at Walter Reed Army Medical Center. The players who went included Ron Villone and Andy Pettitte, both of whom know a thing or two about getting shelled.

The NFL has folded its development league in Europe after 16 years. No word yet on how the football crazy fans of Estonia are going to cope.

Craig Biggio has become the 27th major leaguer with 3,000 hits. It’s just a shame it took him nearly 3,000 years to accomplish the feat.

Struggling Yankees reliever Scott Proctor tried to improve his fortunes by setting his personal game equipment on fire. No word yet on whether the Yankees will consider doing the same thing to Johnny Damon.

The Philadelphia Flyers have agreed to a $52 million contract with free agent forward Daniel Briere. Now all they have to do is sell the franchise three times in order to pay his salary.

You can learn more about The Minute by visiting http://www.minuteorso.com/
Posted by Ryan Murphy at 8:44 AM

Friends, countrymen, jocksniffers...
Welcome to Ask Ryan, the companion blog to my popular Fox Sports column. Please feel free to poke around and pummel me with your head-scracthing queries. I'm here to help!
Posted by Ryan Murphy at 8:38 AM

Ryan Murphy
Ryan Murphy's humorous articles and sports-themed jokes have appeared on more than 170 radio stations and 40 newspapers across the U.S. and Canada. He recognizes that life is hard and that's why he's here to help. Send in some questions and he'll offer some advice. On anything. Well, almost anything.

Sports Sites Worth a Gander